A UK-Based DJ Committed Suicide After Dropping Kids off School 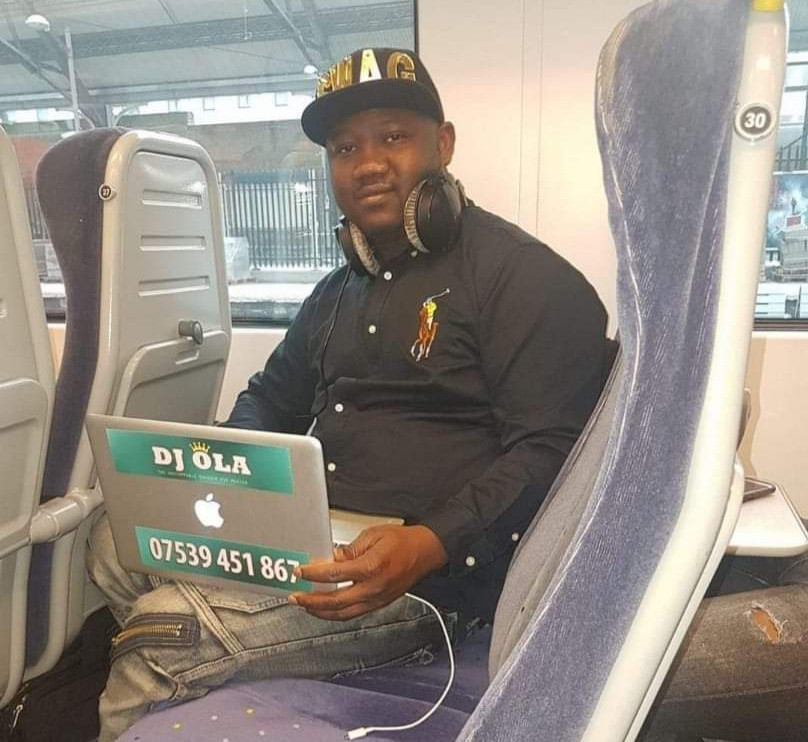 According to reports from his friends, DJ Ola committed suicide on Tuesday, September 13 after battling with depression.

DJ Ola reportedly took his own life, shortly after dropping off his children at school on Tuesday.It was reported that DJ Ola battled depression for a while before committing suicide.

One of his friends alleged that the deceased was sad about series of rumours about him and how people talked down on him to his wife.

In a lengthy Facebook post, the pastor of DJ Ola’s family, Philip Oyewale, who described DJ Ola as someone who was always willing to help others, said he had threatened to kill himself on several occasions, before finally taking his own life yesterday.

Oyewale revealed that a special evening prayer will be held in Liverpool on Friday night, September 16, to celebrate his life.

In the exact words of Pastor Oyewale, he wrote, “One death, too many! I was in a prayer program yesterday, when the wife of D J Ola, called. I declined the call and she sent me one of the most distressing text ever; ‘ I just lost my husband’. I quickly went out to verify the rude joke. With tears, she explained the circumstances that led to his death.”

“Niyi was married to his beloved wife, Hellen. I can categorically tell you, he loved his wife and children to bit. He was a responsible father. He will do anything to protect and provide for his family. He adored his wife. He hated it when you report him to his wife. He loved her and we that were closed to them know it. Let me move to the next point, the cause of his death.”

“Contrary to what has been circulating on the social media, Niyi has always been dealing with depression and insomnia. He had on several occasions threatened to kill himself. Any little thing, he would say, ‘I will just kill myself’. I remember telling him one day in my office with the wife present, that he needed mental health assessment.” “I instructed the wife to encourage him to see the doctor. Since his demise yesterday, I gathered he had attempted to kill himself few times without success. He sent messages to few people a night before, telling them he was depressed. He sent a message to his wife and children also, telling them he loved them but really depressed.” “Personally, I noticed during the son’s tenth birthday thanksgiving in the church on the 28th August, 2022, he was not himself. Niyi will always make a scene with his dancing. That day he was too quiet. And I was thinking, this man eventually is growing. I narrowly missed the hint that could possibly have averted the ugly incident of yesterday.”The message from DJ Ola’s predicament is this: Rejections and rumours hurt, and there are impossible to avoid altogether. Hence, we urge you to learn to deal with all sorts of rejections and rumours. The better you get at dealing with rejections and rumours, the less they are likely to affect you.

Depression is real! In fact, it is a serious illness that can interferes with a person’s life. It can cause long-lasting and severe feelings of sadness and hopelessness, as well as a loss of interest in activities.  Hence, let’s take care of our mental health and always be our brother’s keeper, against all odds. Meanwhile, some of DJ Ola’s friends have taken to social media to express their shock and sadness at his demise.

See a few posts below: 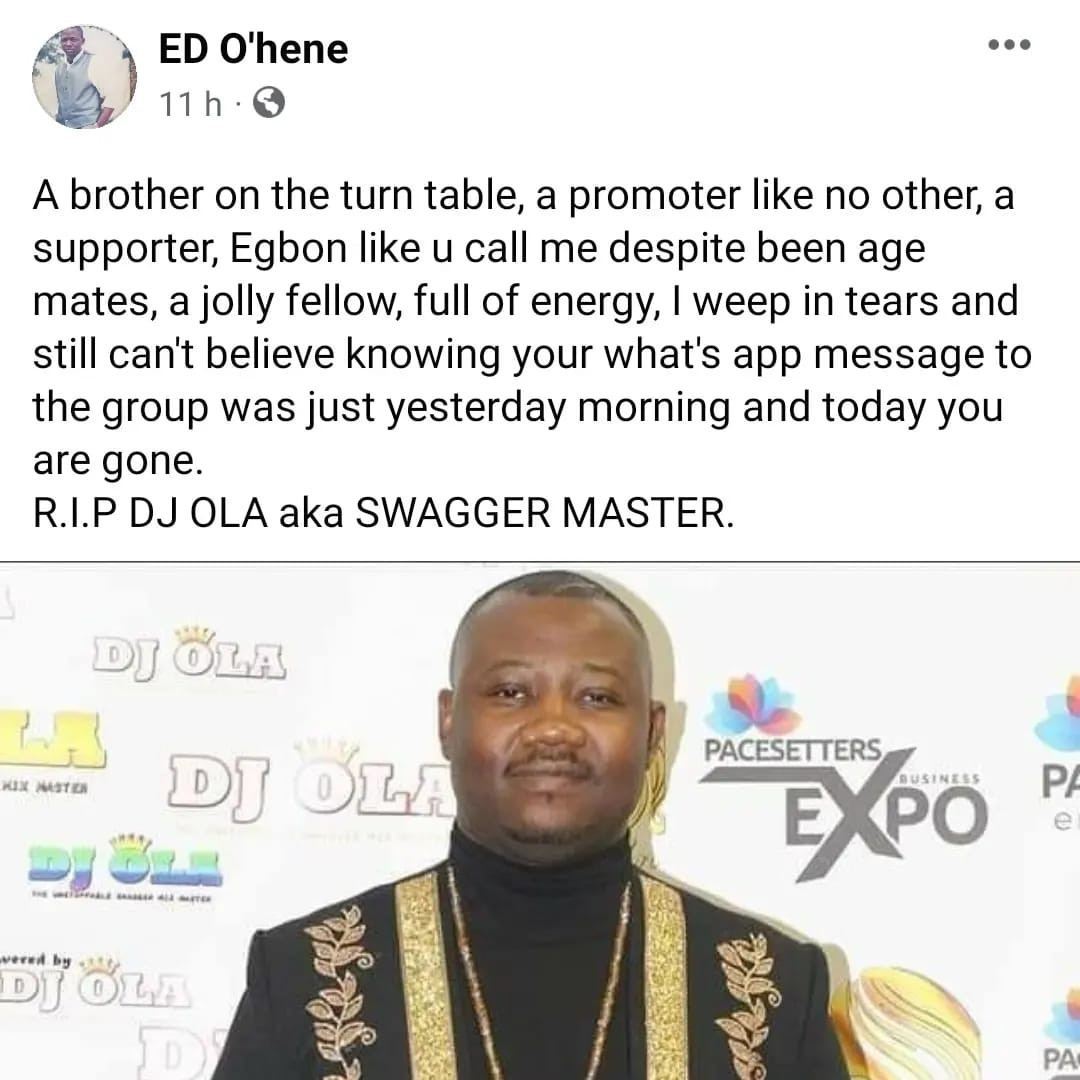 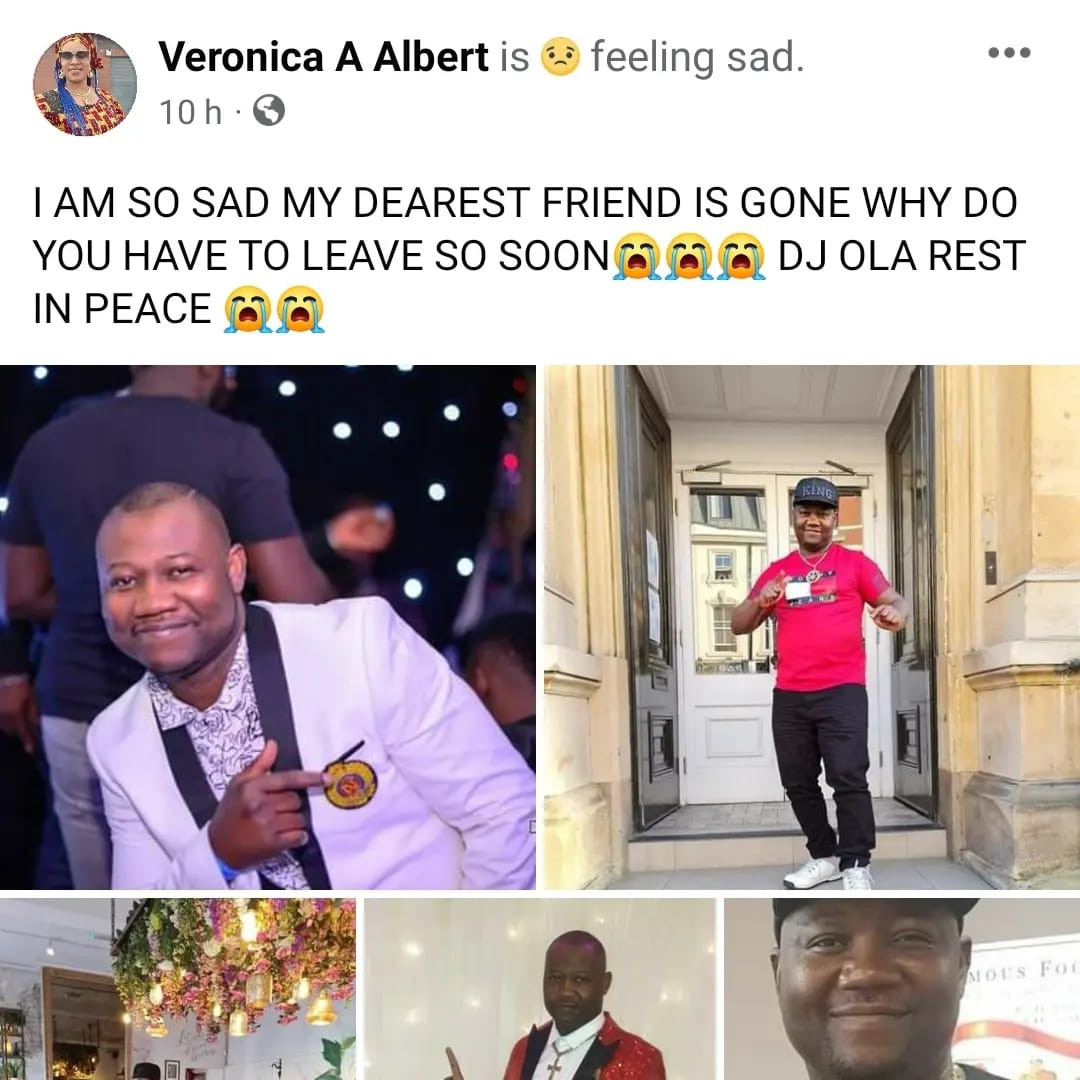 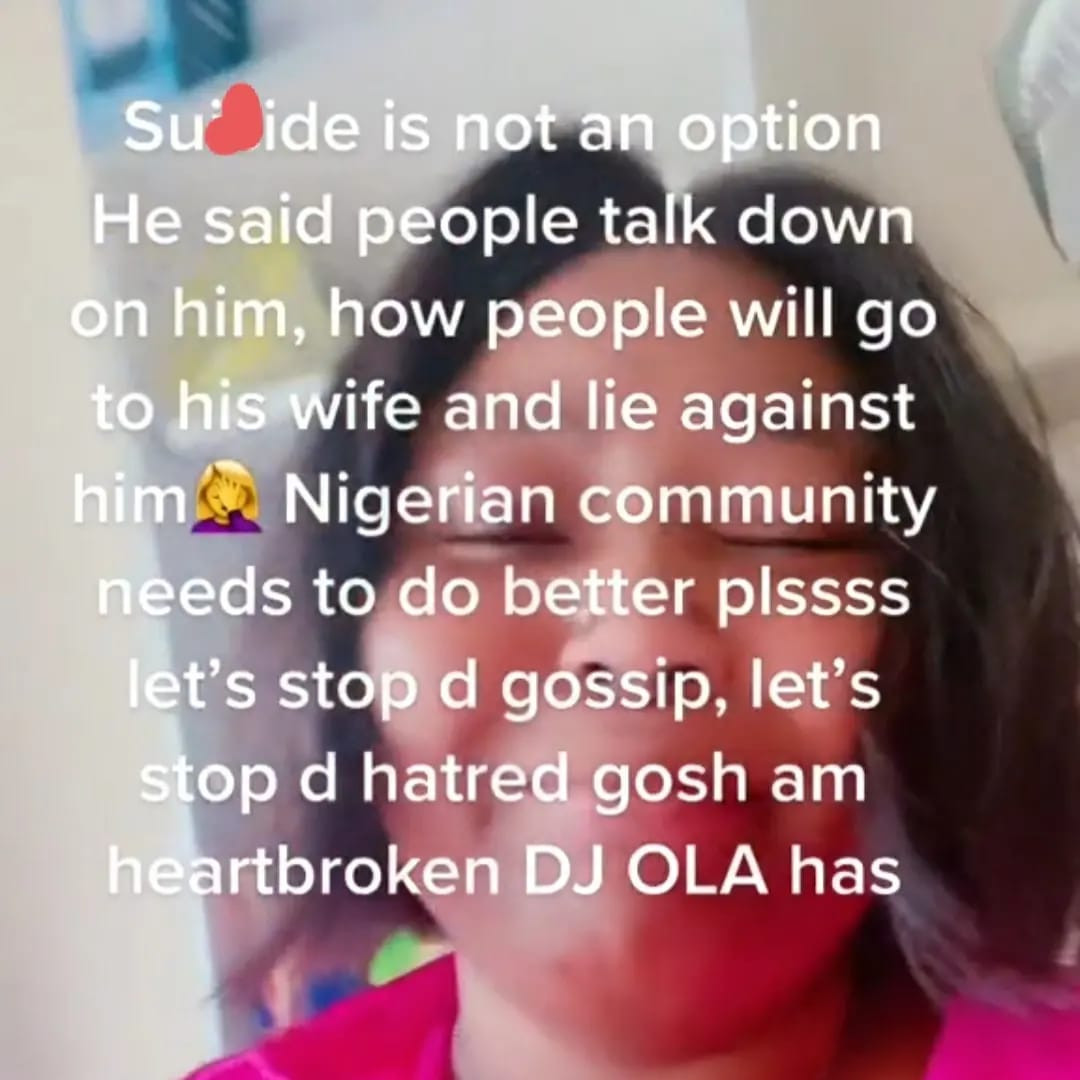 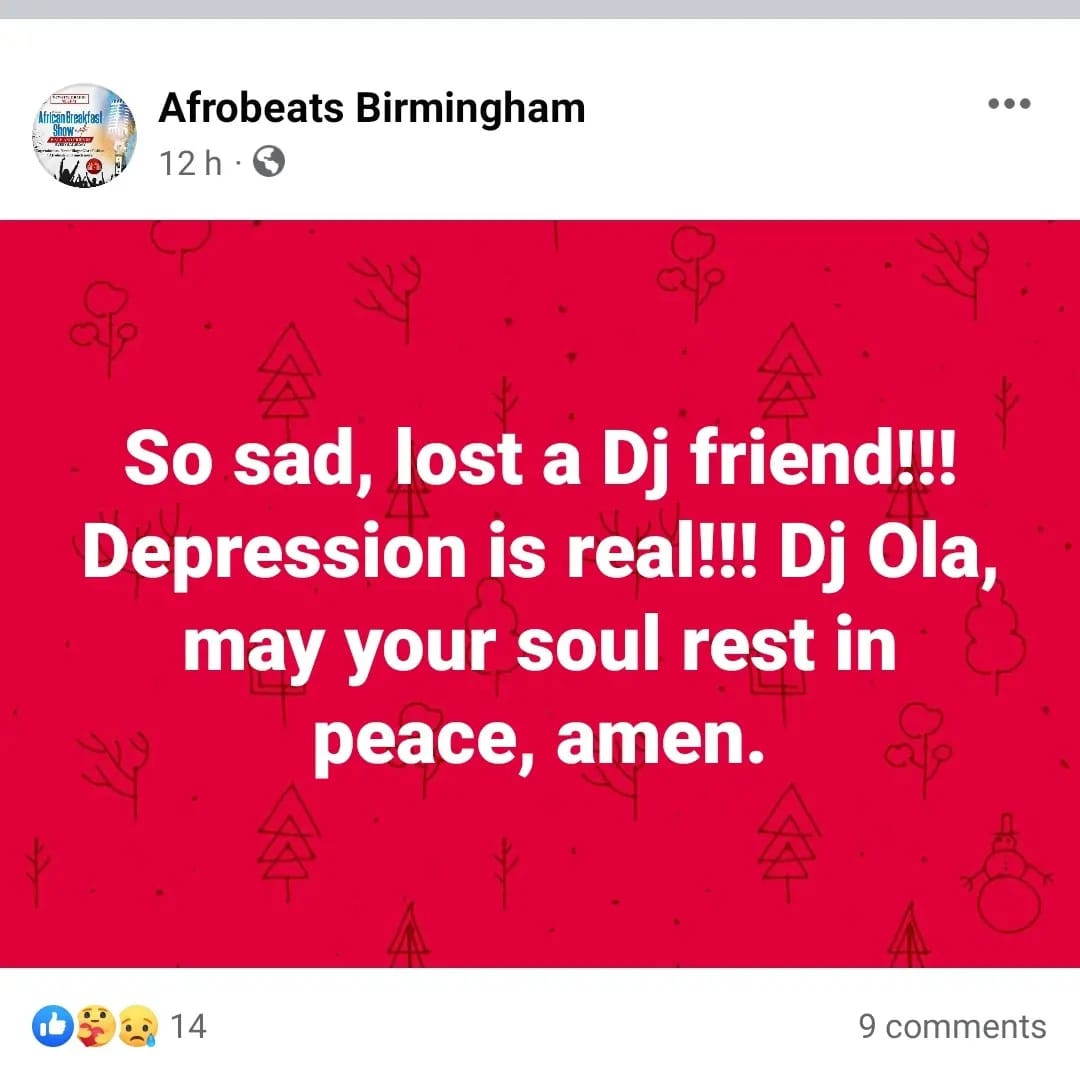 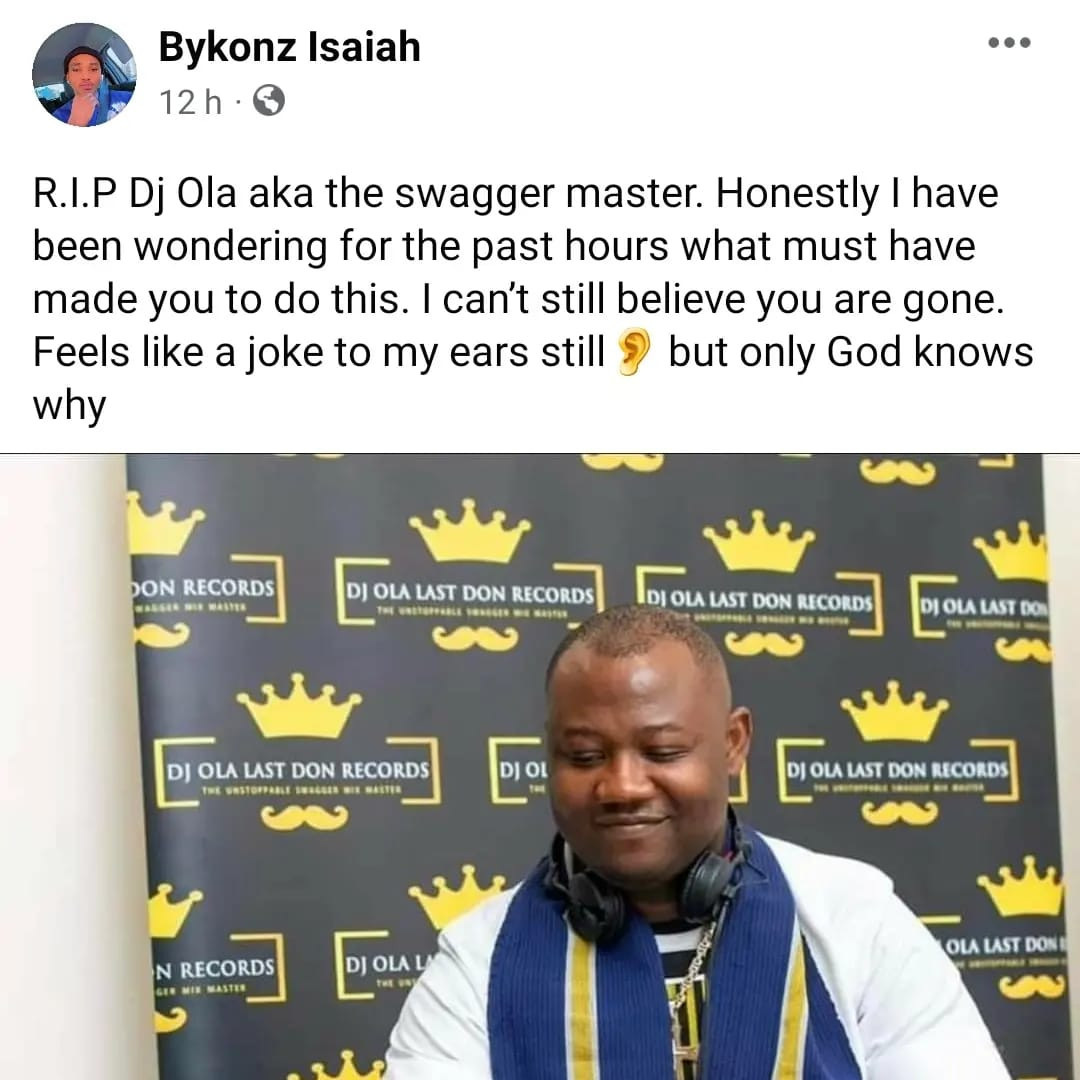