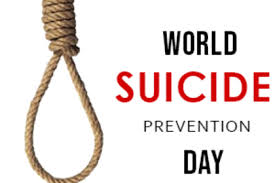 Around the world, it’s sad to note that an estimated 703,000 people commit suicide each year. There are perhaps 20 people who attempted suicide for every suicide, and many more have significant suicidal thoughts.

Suicidal behaviour has a huge influence on millions of people and causes them to experience severe grief. Recent incidence of suicide and attempted suicide among Nigerians especially Nigerian university students is no doubt alarming and disturbing. This has provided more compelling reasons why Nigerians should visit psychiatrists and psychologists more often.

According to World Health Organization (WHO), in the last 45 years, suicide rates have increased by 60% worldwide. Suicide is now among the three leading causes of death among those aged 15-44 (male and female). Suicide attempts are up to 20 times more frequent than completed suicides.

Last year, a student in one of Nigerian universities who ought to have graduated two sessions ago but was delayed as a result of two outstanding courses committed suicide after he repeatedly failed some courses.

Few months ago, I read a sad story of a young lady who took her life after she made a Facebook post. Looking at her Facebook profile picture, she looked happy and smiling and she didn’t give an incline to anybody in the environment that she was going to commit suicide, but by the next day she was gone!

I believe it is time for us to pause and to ask these questions: Why is it that people especially young ones are now embracing suicide which is considered an anathema in African societies as short cut to end their supposed lives of frustrations, hardship and economic nightmares? Why are the services of the psychologists and psychiatrists not being utilized even if one seems to be mentally stable? Do the victims or their loved ones not know where or how to get help? Are they ashamed or afraid of being shunned or stigmatized? While you reflect on those questions, be informed that today is World Suicide Prevention Day.

World Suicide Day focuses attention on the issue of helping individuals defeat the thought of ending their lives, helping reduce stigma and raising awareness among organizations, government, and the public, giving a singular message that suicide can be prevented.

This year’s theme, Creating Hope Through Action is fitting as it helps all of us – family members, friends, co-workers, community members, educators, religious leaders, healthcare professionals, political officials and governments to constantly take action to prevent suicide in the our society. Inarguably, suicide occurrence is a public health issue that has a significant effect on the people in the area.

We can jointly help to reduce the number of suicides worldwide by increasing knowledge, removing the stigma associated with it, and promoting informed action.

Through our actions, we can also show those who are contemplating suicide that there is hope and that we care about them and want to help them. In deed, our efforts, no matter how great or tiny, might give those who are having a hard time hope.