Getting Over Betrayals from Biblical Point of View 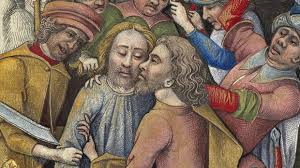 There is perhaps no greater insult to any relationship than betrayal. Betrayal robs us of a sense of security. Someone close to us has proven untrustworthy. I tell you, I have felt the sting of betrayal severally! Likely, most of us have even inflicted it. So, what do we do about it?

There are obvious dangers in not overcoming the pain betrayal causes – losing the ability to trust, becoming a betrayer in retaliation or self-defence, not acknowledging the betrayal and thereby exposing ourselves to further hurt, emotional numbing to avoid the pain (which will eventually lead to an inability to experience joy as well). We work through the pain so that we might trust again, so that we might find the true foundation of our security.

Jesus was not immune to betrayal. Judas, one of the twelve disciples, a friend whom Jesus trusted with the group’s finances, turned him in to be crucified. What is perhaps worse is that Judas accepted thirty pieces of silver in exchange for the life of his friend. He betrayed Jesus with a kiss of greeting. Jesus knew that Judas would betray him, yet he chose to bring the man into his inner fellowship. Jesus called Judas “friend,” even after the kiss that would lead to Jesus’ arrest.

On a smaller scale, Peter betrayed Jesus. The disciple who vowed to follow Jesus to death, three times denied even knowing Jesus. After his resurrection, Jesus restored Peter, giving the man three opportunities to affirm his love for him and confirming his trust in the disciple.

David, too, experienced the sting of betrayal. In Psalm 55:12-15 he writes, “For it is not an enemy who taunts me -then I could bear it; it is not an adversary who deals insolently with me – then I could hide from him. But it is you, a man, my equal, my companion, my familiar friend. We used to take sweet counsel together; within God’s house we walked in the throng. Let death steal over them; let them go down to Sheol alive; for evil is in their dwelling place and in their heart.”

David was no stranger to the torment of enemies, but even that seemed less painful than betrayal from a friend. Let us look at David’s response. “But I call to God, and the God will save me. Evening and morning and at noon I utter my complaint and moan, and he hears my voice. He redeems my soul in safety from the battle that I wage, for many are arrayed against me. God will give ear and humble them, he who is enthroned from of old, Selah, because they do not change and do not fear God.” ( Psalm 55:16-19)

David’s first response was to experience the pain of betrayal. He did not minimize his sense of hurt. He poured it out to God. We, too, must acknowledge when we have been hurt. And then we need to share that hurt with someone who understands. God understands. Not only was Jesus betrayed in his time on earth. God has been, in a sense, betrayed by His creation. He created us that we might glorify Him and enjoy Him. Instead of obeying God’s instructions, we sinned against Him, and He had to redeem us through the sacrificial blood of Jesus Christ. Because God so easily relates with our pain, we can pour out our hurt to Him in prayer.

When the betrayal is deep, it can be helpful to talk with a trusted friend or counselor as well. Please, be wise to refrain from gossip in doing this.

David realized his behaviours needed to be altered. He recognized that he could not trust his friend in the same way. Psalm 55:20-21 says, “My companion stretched out his hand against his friends; he violated his covenant. His speech was smooth as butter, yet war was in his heart; his words were softer than oil, yet they were drawn swords.” David understood his friend’s true heart.

It needs to be said that not all betrayers commit their act intentionally. Judas and David’s friend certainly did. Peter did not. Sometimes friends betray us simply because they are sinful human beings (just like us). It is still wise to recognize that these people may not be as trustworthy as we once believed. However, it would be unwise to paint them with a broad brush, declaring them evil and unworthy of reconciliation.

The final step in overcoming the pain of betrayal is that of forgiveness. When we forgive someone, we are really giving ourselves a gift. Especially when people intentionally inflict pain on us, our withholding of forgiveness hurts us more than it does them.

To forgive someone is to give up our right to vengeance. We acknowledge that their act was wrong, we might be more careful in trusting them with certain issues, but we do not attempt to get back at them.

We don’t betray someone who betrayed us. Instead, like David did, we leave it in God’s hands. David concludes his Psalm this way: “Cast your burden on God, and he will sustain you; he will never permit the righteous to be moved. But you, O God, will cast them down into the pit of destruction; men of blood and treachery shall not live out half their days. But I will trust in you.” – (Psalm 55:22-23). God will take care of evildoers. And he will take care of us.

Betrayal is a robbing of security through a breaking of trust. We overcome the heartache it causes by giving our pain to God. We call the betrayal for what it is, reconsider our personal boundaries, and recognize that only God is truly trustworthy. We tell him our pain and allow him to handle those who would hurt us.

Written by Adeogun Joseph Kayode. Kayode is a Certified Content Marketing Strategist, Journalist, Communications and  Leadership Coach with over 15 years working experience with individuals and various organizations in Nigeria and across the world. He is also an author of ten books on school leadership, new media, digital marketing, public speaking, freelance writing and entrepreneurship.